Ponds and wetlands represent unique aquatic and riparian environments not found where the water flows quickly. Riverbend evaluates the hydrologic opportunities at a particular site, and develops site plans which maximize the benefits that can be accomplished. Most of our clients are interested in creating sustainable ecological micro-communities. They understand that diversity in the riparian plant community will result in more abundance and variety of the bugs and birds. Depth of water in a pond affects what aquatic species will be present. Ponds and wetlands can be complex, highly productive places in our environment. Careful planning, design, and implementation ensure these outcomes. Scroll below or use the menu to the right to read more about our wetland and pond projects.

This project spanned over 4 years and included a river assessment of ~9 miles for possible fish habitat improvements for species of concern, Roundtail chub (Gila robusta) on the Navajo River above Dulce, NM.  That assessment has led so far to ~5 miles of river restoration projects, and reconstruction of the main diversion dam for the potable water supply for the town.

To ensure an adequate diversion of water for the community, the existing dam (piled up river gravel and large rocks) required annual maintenance efforts.  The old dam also created a fish passage barrier, impeding the Nation’s efforts at recovery of the Chub.    The Nation initially considered a much more expensive concept plan for a concrete structure. In the end the diversion was constructed with large boulders and a series of step-pool weirs extending downstream.  Native riparian transplants ensured high function and aesthetics as well as reduced annual maintenance costs. This alternative design provides for natural fish passage and minimizes maintenance time and costs significantly.

Riverbend’s services to the Nation included surveying, hydrologic and hydraulic calculations, preliminary and final designs, construction cost estimates, confirmation of 404 & 401 permit exemptions, project specifications and bid documents. In the implementation phase of the irrigation dam modification project Riverbend was hired as the general contractor, and had construction management personnel onsite each day during construction.

This mile-long section of the Rio Mimbres has been owned by the New Mexico Department of Game & Fish (NMDGF) for several decades. This reach is managed for conservation of the endangered Chihuahua Chub fish (Gila nigrescens) and the listed Chiricahua leopard frog (Lithobates chiricahuensis)–public access is limited and fishing is not allowed.   A forest fire in 2006 in the Black Range had left the upper reaches of the Rio Mimbres watershed devastated.  Subsequently there have been several very large flow events that originated on burn-scar areas. Sediment deposition and woody debris accumulations from these fire accentuated runoff events had made habitat conditions that were already poor even worse. The river restoration design for this project paid special attention to the specific habitat needs of both endangered species, and preserved the status of the very healthy existing riparian vegetation.

Riverbend’s services to NMDGF for both these projects included surveying, hydrologic and hydraulic calculations, preliminary and final designs, construction cost estimates, project specifications, and bid documents. In the implementation phase of the project Riverbend provided construction oversight.  To mimic natural habitat features where sustainable populations of the Chub are currently found, design relied heavily on woody debris type structures and localized scour pools. Habitat for the frog was created by enhancing natural wetland depressions, and with new off channel ponds that are hydraulically connected to the river. 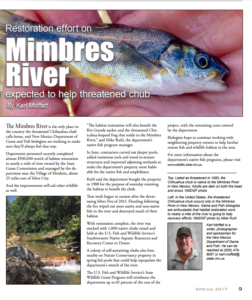 Riverbend Engineering has been working with the New Mexico Department of Game & Fish on its river restoration efforts as outlined in the Management plan for the San Juan River published in September of 2005.  This reach of Quality Trout Waters is below Navajo Dam on the San Juan River in northern New Mexico east of Aztec & Bloomfield, NM.   Projects include the Braids, Munoz Flats, Hammond Tract, Simon Canyon, and the Rainbow Lodge Boat Ramp. 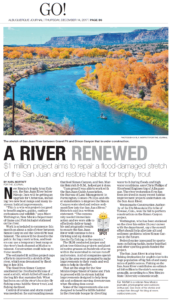 [OTHER NEWS STORIES ABOUT RIVERBEND ENGINEERING & OUR RIVER RESTORATION PROJECTS]

This project restored a section of the river, which was severely damaged by flooding in September, 2013. The project included full replacement of an existing irrigation diversion dam and headbox, installation of in-stream fish habitat structures, restoration of a river side channel as spawning habitat, installation of riparian and wetland plant species.